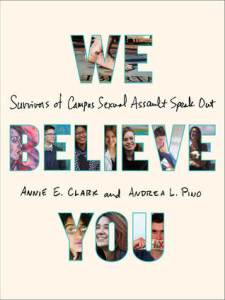 Title: “We Believe You: Survivors of Campus Sexual Assault Speak Out”

Synopsis (from the back cover):

“More than 20 percent of women and 5 percent of men are sexually assaulted while at college. After decades of near silence from school communities, some survivors are now coming froward. In We Believe You, students from every kind of college and university — large and small, public and private, highly selective and less so — share experiences of trauma, healing, and everyday activism. They represent a diversity of races, economic and family backgrounds, gender identities, immigration statuses, interests, capacities, and loves. Theirs is a bold, irrefutable sampling of voices and stories that should speak to all.”

Trigger/Content warnings for the novel:

Representation in the novel:

I feel slightly weird about reviewing a book like this because it makes it seem like I’m rating people’s lives. Like, “Oh, this part right here? Nah, sorry, doesn’t sound all that good to me.” And I’m not trying to do that at all. If anything, I want to spread the word about this book because I think it’s an important one to read, if you can. I mean “if you can” because I know, for a lot of people, reading accounts of sexual assault can be triggering.

But I think it’s a good book, especially for those who “just don’t get” that sexual assault can happen to anyone, in varying degrees. We Believe You has so many different kinds of people: men, women, nonbinary people, who are different races, sexualities. From different socioeconomic backgrounds. Some of them are first-generation college students, while others hail from families who have many degrees. Some people were sexually assaulted by strangers or by friends/acquaintances; whilst passed out or completely conscious and sober. I think hearing accounts from “real life” people might actually get through some people’s heads that sexual assault isn’t this narrow definition that they may think it is.

However, in terms of the way the book was structured, it was a bit confusing, trying to keep every one’s story in line. The book is set up in five sections and a “resources” section after that. These five sections include “Before,” “How it Happened,” “Trauma and Betrayal,” “Healing and Everyday Activism,” and “Declarations of Independence.” I think it is a good way to set up the book, but personally, I kept mixing up people’s accounts with others’. It didn’t subtract from the reading of the book all that much, but it was hard for me to keep track of who was who sometimes.

But, compared to the rest of We Believe You, that’s just a minor inconvenience. This book, I think, is an extremely powerful one. And every person who told their story within its pages, no matter who it was, no matter where they’re at in recovery, is powerful, too.

2 thoughts on “REVIEW #10 | “We Believe You: Survivors of Campus Sexual Assault Speak Out””