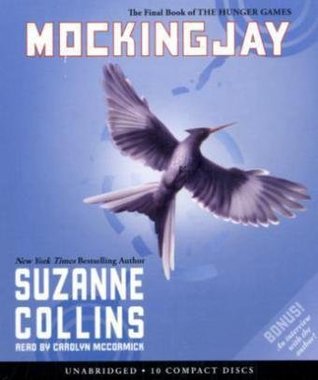 Synopsis (from back of CD case):

“Who do they think should pay for the unrest?

“The final book in The Hunger Games trilogy by Suzanne Collins will have hearts racing, pages turning, and everyone talking about one of the biggest and most talked-about books and authors in recent publishing history!”

Trigger/Content warnings for the novel:

Representation in the novel:

When I say I have love-hate feelings about this book…. I really mean it.

Mockingjay by Suzanne Collins picks up a few weeks or so after Catching Fire. Katniss and a group of people from District 12 are now in District 13. On the outside, the revolution between the Capitol and the rest of the Districts rages on, with District 13 staying mostly on the sidelines.

I’ll start with what I loved about this book. It’s so much more character-driven; the reader gets a lot more into Katniss’ head as she tries to survive the aftermath of not only two Hunger Games, but also of her District being destroyed. A lot of the reviewers on Goodreads that didn’t like this book because it wasn’t full of action, and there wasn’t another Hunger Games. Some of them thought it was boring. But honestly? I loved how much it was character-driven. The reader knows how much Katniss just wants all of this to be over with, revolution and all. She doesn’t even want to be the face of the revolution.

And I love that about Katniss: she isn’t the leader that people want her to be. She does what she has to do, but she doesn’t want to lead people to their deaths, or lead them at all. She just wants to get Peeta back and live her life with her family and friends.

Now…on to the stuff I didn’t like. Note: I’ll try to keep this as spoiler-free as possible, but no promises.

So the first thing that immediately made me so annoyed about Mockingjay was what happened to Peeta. Now, I’m not saying what physically happened to him; shit happens. But all of that character development the reader experiences over the past two books? Entirely disappears. The first book, it might not have been that obvious, but during Catching Fire, I felt like the reader saw a lot of potential in Peeta’s character. Even though he was angry with Katniss for whatever reason, he still said and did what he had to do to keep both him and Katniss safe.

But what happened to him during Mockinjay? Conveniently, it reversed all of that potential. All of that development. Gone. To me, it didn’t really have a purpose outside of making new drama between Katniss and Peeta, as if there already wasn’t enough drama in the book. ‘Cause, ya know. There’s a revolution going on.

It just seemed like Collins wasn’t sure what to do with Peeta, so this was just a way to do away with anything that could have developed. It’s kinda lazy writing.

Also, I could not stand Gale at all. He became so angsty about Katniss not loving him romantically (I do think she loves him platonically, and I want to say she says that during the book, either speaking to him or thinking it). I couldn’t keep track of the amount of times he said something along the lines of, “Oh, but you wouldn’t do that for me.” in response to something she did for Peeta. He tries to guilt her so much throughout the novel, and I hate it. Just…stop, my dude. I get it, you don’t like that she isn’t in love with you, but stop saying you’re okay with her not loving you romantically…and then keep getting mad at her because of it. I was so sick of him throughout the book.

Now. On to what got me. On to the thing that made this book go from around two and a a half or three stars all the way down to 1.5 for me.

Regardless of Peeta’s weird thing going on, I still really liked Mockinjay. Well. That was before the epilogue, I mean.

Okay, now I’m really getting into spoilers. So if you don’t want to be spoiled, feel free to skip over the text until you see more bolded text like this.

So. This damn epilogue. Let me start with this: what the fuck. Throughout the entire series, Katniss makes it known that she doesn’t want children. At all. Yes, part of that comes from the fact that she doesn’t want them to go through the Hunger Games, but still. She never wanted kids. And now? She suddenly has them? However, that’s not all of it. The real kicker was that, even then, Katniss never wanted children. I don’t have the exact quote because I listened to the audiobook, and I returned my copy to the library before I wrote this, but. I know for a fact that Katniss says that Peeta wanted children, she didn’t really want them, and after so many years of Peeta pressuring her, Katniss finally agreed. I just. Really? We’re really doing this? Katniss never wanted kids, ever, and only after being pressured for so many years, does she “agree” to have them. What??

Alright, spoilers are over, y’all. Spoiler-free folks, you can start reading again.

Once again, I feel like this was because Collins wasn’t sure what to do. “Oh, the series is over? Well, we have to do something!” And it was the worst possible “something.” It’s as if she didn’t even know her characters, characters that she’s written for the past two books. I was just so frustrated over this damn five-minute ending.

Tl;dr: while I loved the character-driven aspects of Mockinjay, Peeta’s bullshit character “development,” Gale’s entire presence, and the epilogue completely ruin the conclusion to The Hunger Games. Bah humbug.